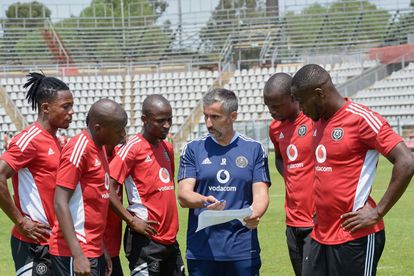 Some strikers may be finding game time hard to come by at Orlando Pirates at the moment, but it seems like they’re the flavour of the month at SuperSport United.

Players like Kermit Erasmus, Monnapule Saleng and Zakhele Lepasa have all been making use of their opportunities leading the line for Pirates of late.

Eva Nga out of favour at Pirates

Their good form has seen other forwards at the club such Bienvenu Eva Nga follow lower down the club pecking order. Having only just signed for the club at the start of the current season, it looks as if Eva Nga has already found himself out of favour at Pirates.

Eva Nga is a player that has been in South Africa’s topflight since January 2020 when current SuperSport coach Gavin Hunt brought him to the country. At that time, the big Cameroonian was brought to play for the now sold Bidvest Wits. Upon the player exodus at the club, he found himself in the Eastern Cape, signing for Chippa United.

Was also linked to Kaizer Chiefs

After a few seasons at Chippa, the target man seemed to make the desired impact as his efforts would soon catch the eyes of bigger clubs in the DStv Premiership. Initially he was linked to Pirates’ archival Kaizer Chiefs, with there being confirmation of a transfer fee agreement already in place between the two clubs. That agreement then seemed to fall through after the sacking of Amakhosi’s former coach Stuart Baxter.

New Chiefs coach Arthur Zwane seemed to have a completely different profile of the striker he wanted to bring to the club, and that in turn gave Pirates a clear path to Eva Nga’s signature. But now having secured his signature, things have not exactly gone to plan for him at the Buccaneers and according to Soccer-Laduma, Hunt is plotting a swift reunion with his former striker at SuperSport.

“Word reaching the Siya Crew is that SuperSport United head coach Gavin Hunt has earmarked his former player Eva Nga for a potential loan deal from Orlando Pirates. Siya sources have indicated that Hunt is looking to strengthen the Matsatsantsa side and make a title charge, and it is believed that he has Eva Nga alongside Terrence Dzvukamanja , as potential targets” the publication wrote.

“Gavin is the one who signed these players, so he knows them best and now he wants to work with them at SuperSport United again” confirmed a source to the same publication.

The statement of intent is clearly there from Hunt and SuperSport. It now remains to be seen if Pirates would be willing to let both players join a club that is currently above of them on the log.