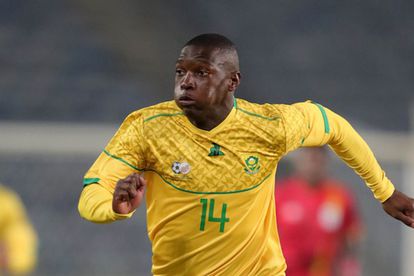 On Tuesday, Sundowns confirmed they had bolstered their squad with the addition of Bradley “Surprise” Ralani.

According to Kickoff.com, the Sundowns are also edging closer to securing the services of Maritzburg United striker Bongokuhle Hlongwane.

The talented 21-year-old is on the wanted list for when the January transfer window opens next week, while Cape Town City midfielder Bradley Ralani has also been linked with the Brazilians.

Should Sundowns manage to secure the signature of Hlongwane in the January window, it’s reported that they would still loan him back to Maritzburg for the remainder of the season.

“Trot Moloto is the person handling the deal and has already met Hlongwane’s parents with the intention to lure the player to Gauteng next year,” a source close to the club revealed to KickOff.

“The plan is to sign the player in January and loan him again to Maritzburg United until June next year.”

Sundowns look set to clinch another DStv Premiership title, with the Brazilians leading the log by a 14-point margin, having accumulated 44 points after 19 games so far this season.

Sundowns said they were delighted to welcome attacker Bradley “Surprise” Ralani from Cape Town City. The Kimberley-born midfielder makes his way to Tshwane to represent The Brazilians following the signing of an 18 months deal, with a one-year option to extend.

Ralani – who started his career locally at the Stars of Africa academy – is an experienced campaigner who has plied his trade in Norway and Sweden, representing numerous clubs including IFK Hässleholm, Helsingborg, Landskrona & Lyngby BK before returning so South Africa in 2018 to join City.

Surprise has been a prominent player in his time in the Mother City, contributing goals and assists and becoming the clubs all-time leading goalscorer earlier this season. The attacker’s form for The Citizens this season has seen him make 16 appearances in all competitions, scoring two goals and two assists in the process.

When the team returns to training at Chloorkop, Ralani will be linking up with a familiar face when he reunites with former teammate Kermit Erasmus, who also signed from the Cape Town outfit.