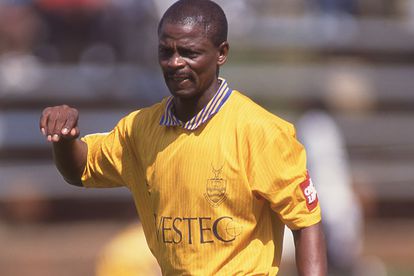 The year 1986 was a very good one for Kaizer Chiefs, a year in which they won the JPS Knockout, National Panasonic Champion of Champions and the inaugural Iwisa Charity Cup.

PICTURE | PITSO MOSIMANE IS BACK IN SOUTH AFRICA!

The one trophy they always craved, however, the league title, eluded them as they had to settle for fourth spot under coach Ted Dumitru.

While they were now well and truly South Africa’s cup kings, even though they lost out on the league title in 1986 they did have their moments in the league, no more so than a pulsating 3-2 Soweto derby victory on 4 October against the old enemy.

The man with the new captain’s armband, Marks Maponyane, was one of the Kaizer Chiefs scorers, along with Absalom ‘Scara’ Thindwa, the Swazi striker who was absolutely brilliant that season.

Thindwa scored numerous crucial goals that saw him win the 1986 Players’ Player of the Season.

The other Chiefs scorer in this Soweto derby was another talented player whose name is up in Amakhosi lights, Nelson “Teenage” Dladla.

A Bucs brace for Basil ‘Kaapse Dans’ Steenkamp wasn’t enough to defeat the Amakhosi, who emerged as Soweto derby winners on the day.

‘Go Man Go’ Maponyane would of course be another rare player who turned out for both clubs, but it was at the Amakhosi where he scored his most memorable goals and reached the highest heights.

For Maponyane, approaching a Soweto derby or a major cup final was all about “knowing your opponent” and studying their weaknesses.

“Players have it easy these days, as the team’s video analyst will tell them about their opponent’s strengths and weaknesses. I did that myself, going for example to the stadium on a Friday night to watch a game and analyse the defenders. If their defender was left-footed, I would slip the ball over his right-foot to go past him. I read the weakness of opposing defenders and knew how to expose it,” says Maponyane.

Over the years, the Amakhosi would ruthlessly expose their opponents’ weakness countless times, with the Soweto derby remaining a major highlight on the country’s football calendar.

Sunday’s Soweto derby at the FNB Stadium will kick off at 15:00.