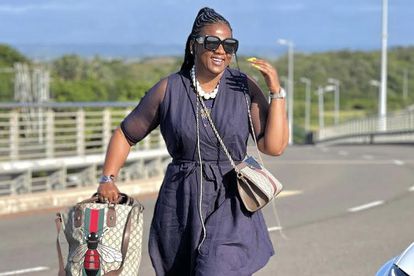 Shauwn Mhkize has hailed her Royal AM team after they scored twice in extra time to beat SuperSport United in their DStv Premiership clash. Photo: Instagram @kwa_mammkhize

Shauwn Mhkize has hailed her Royal AM team after they scored twice in extra time to beat SuperSport United in their DStv Premiership clash. Photo: Instagram @kwa_mammkhize

Royal AM owner Shauwn ‘MaMkhize’ Mhkize has hailed her team after they scored twice in stoppage time to beat SuperSport United 2-1 in their DStv Premiership clash at the Chatsworth Stadium on Tuesday.

Matsatsantsa took the lead on the half-hour mark via Thamsanqa Gabuza who produced a clinical close-range finish.

The match was then turned on its head when SuperSport United centre-back Luke Fleurs was sent off for a second bookable offence in the 59th minute.

It allowed Royal AM back into the game and they capitalised on their numerical advantage – but they left it very late.

First, Zukile Mkhize’s right-footed shot from the right side of the six yard box found the bottom right corner in the 90th minute.

And then in the third minute of stoppage time, Menzi Masuku played a one-two with Ndumiso Mabena before placing the ball into the bottom left corner with the outside of his foot to complete a dramatic turnaround, much to the delight of MaMkhize who was in attendance.

READ | WHO IS TENDAI NDORO? 10 THINGS TO KNOW ABOUT THE FORMER ORLANDO PIRATES STRIKER

She then uploaded a second post showing the two goals scored by Royal AM and added: In case you missed it, this is how my boys @royalam_fc followed the brief and came through. Well done on a stellar performance, you made us proud. Remember it’s less about how you start but rather how you finish and you finished STRONG!!!!????????????????????????❤️❤️❤️#RoyalAM#RoyalAMNation#thwihlithwahla boys #Kwamamkhize#myworldmyrules

The win saw Royal AM move to third in the standings with 17 points after nine matches this season.

Royal AM will next be in action when they host Baroka FC on Sunday, 7 November.