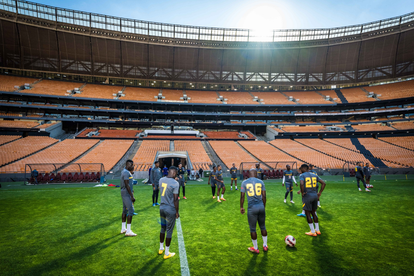 A very famous SA celebrity icon has made a desperate plea to Kaizer Chiefs – promising a three hour concert at the FNB Stadium.

Zahara, famous for her hit single ‘Loliwe’, has made a desperate plea to Amakhosi to support her.

In exchange, she is offering a three hour concert at FNB Stadium. Thus, following in the footsteps of Nyovest’s who performed at the same venue for Mamelodi Sundowns during the CAF Champions League.

Zahara has made a desperate plea to Chiefs to help support her and her family.

She is offering a three hour concert in return for the FNB Stadium as a facility with sound equipment and support for her family.

“I want to approach Kaizer Chiefs to help me. I promise to do great. I just want to have a concert, not just for me, but my fans and family too,”

“I want to plead with Chiefs and Kaizer Motaung when they have their next match. I don’t want to do much. I just want to sing my heart out. I can do a three-hour show. All I’m asking for is the sound equipment, stadium and ambulances as well as other things,” Zahara stated on DailySun.

Hopefully, Zahara serves as a better omen to Chiefs than Cassper did to Sundowns.

When Nyovest’s performed, Sundowns drew 1-1 and faced a shock exit from the CAFCL. If Zahara’s request is approved, she will perform when Amakhosi take on Sekhukhune United during the DStv Premiership on Saturday, 14 May.

As things stand, the Chiefs management have set up a meeting to discuss their decision.

They will answer to the SA musicians request after their meeting on Thursday, 12 May.