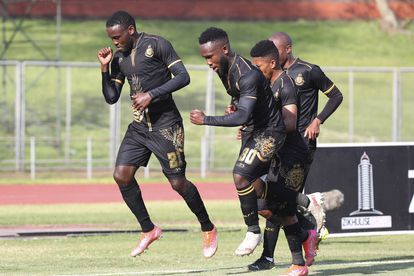 Royal AM striker Victor Letsoalo has spoken about his chances of winning the Lesley Manyathela Golden Boot award at the of the season as well as his future.

RIP | KAIZER CHIEFS MOURN THE DEATH OF HEAD OF SECURITY

However, the Bafana Bafana international still believes he can beat Shalulile to the individual accolade come the end of the season.

“This is motivating me because competition is what you are looking for in the sport,” said Letsoalo as per Daily Sun.

“I still believe I can beat him for the award,” he said.

LETSOALO TALKS ABOUT HIS FUTURE

For months now, Letsoalo has been linked with a move away from Royal AM who recently took an option to renew his contract by a further year.

READ | KAIZER CHIEFS CHARGED BY PSL: HOW AMAKHOSI ARE LIKELY TO PLEAD

Kaizer Chiefs and Orlando Pirates have all been linked with Letsoalo, but Royal AM have been firm in their stance to want to hold on to him.

Speaking about his future, Letsoalo didn’t want to be drawn into whether or not he will still be at Royal AM next season, saying he’s focused on the club and scoring goals.

“Right now, I’m focusing on Royal AM and scoring goals for the club,” added Letsoalo.