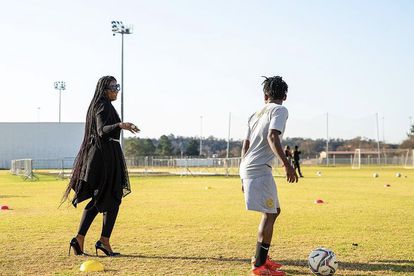 Royal AM owner Shauwn “MaMkhize” Mkhize has taken time out from her hectic schedule to join her DStv Premiership team in a training session. Photo: Instagram @kwa_mammkhize

Royal AM owner Shauwn “MaMkhize” Mkhize has taken time out from her hectic schedule to join her DStv Premiership team in a training session. Photo: Instagram @kwa_mammkhize

On Monday, a number of local publications, including Unplayable, revealed that Zondo was not in camp with Royal AM for their game against SuperSport United on Tuesday.

And this was true as Abram Nteo was named as coach when the Royal AM team sheet was made available to the public before the said match.

Now, speaking to SuperSport TV before the game, MaMkhize, as she’s affectionately known, denied that Zondo had left Royal AM.

Instead, the veteran mentor is in Pietermaritzburg with a group of players preparing for Sunday’s CAF Confederation Cup match against ZESCO United, according to MaMkhize.

MaMkhize also called out Unplayable for breaking the story of Zondo leaving Royal AM, saying the reports are unsettling her club.

“Khabo stayed behind with the team that is going to be playing on Sunday,” said MaMkhize.

“He is [still there], and I want to say this message directly to Unplugged (Unplayable)… I don’t know if it’s Unplugged that has written the story but what they are doing is wrong because we are here, [and] we are available to talk to them.