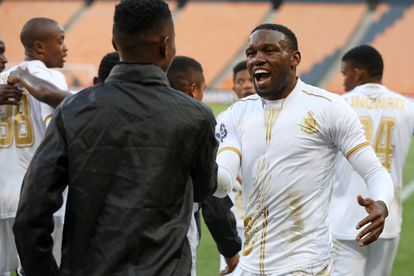 Victor Letsoalo of Royal AM celebrates goal with teammates during the DStv Premiership 2021/22 match between Kaizer Chiefs and Royal AM on the 18 September 2021 at the FNB Stadium, Johannesburg ©Muzi Ntombela/BackpagePix

Victor Letsoalo of Royal AM celebrates goal with teammates during the DStv Premiership 2021/22 match between Kaizer Chiefs and Royal AM on the 18 September 2021 at the FNB Stadium, Johannesburg ©Muzi Ntombela/BackpagePix

Royal AM cut Mamelodi Sundowns‘ lead at the top of the DStv Premiership log to 14 points with a 2-2 draw away to Stellenbosch FC on Sunday.

Mxolisi Machupu and Tebogo Potsane scored for Royal AM while Judas Moseamedi bagged a brace for Steve Barker’s side on the day.

Stellenbosch FC finished the game with 10 men as Zitha Kwinika received a red card very late in the game.

Royal AM had a bright start to the first half as Macuphu opened the scoring 14 minutes into the encounter, and thus, sending shockwaves to the home side.

Stellenbosch had the chance to draw level after 25 minutes when Stanley Dimgba was brought down inside the Royal AM box by Kabelo Mahlasela.

However, Hugo Nyame did well to keep Royal AM in the lead as dived to his left to deny Junior Mendieta what would have been a Stellenbosch equaliser.

Stellies almost gifted Royal AM a second goal in the second half as Sage Stephens took his off the ball from a back pass but he quickly recovered and made a save, clearing the ball off the goal line.

Moseamedi then entered the fray in place of Mendieta, and he made an immediate impact as brought Stellies back into the game with a sublime finish in the 63 minutes.

Stellies nearly went 2-1 up later in the game through Moseamedi but the lanky striker was denied by Nyame.

Barker’s men were made to pay for the missed chance as Potsane fired Royal AM ahead in the 83rd minute, much to the delight of John Maduka’s bench.

Stellenbosch would then receive a red card after Kwinika was given his marching orders for a second bookable offence in the 86th minute.

However, Stellies rallied as Moseamedi made amends and equalised for the Western Cape-based side six minutes later.

The match ended in 2-2 draw with Royal AM moving to 37 points after 22 games, and thus, cutting Sundowns’ lead at the top to 14 points.

STARTING XI: STELLENBOSCH VS ROYAL AM