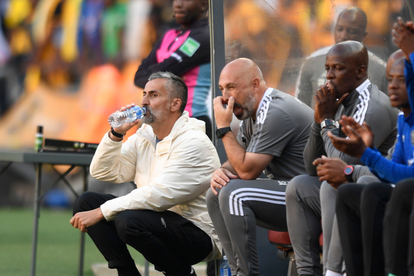 Jose Riveiro head coach of Orlando Pirates during the DStv Premiership 2022/23 match between Orlando Pirates and Kaizer Chiefs held at at FNB Stadium in Johannesburg on 29 October 2022. © Sydney Mahlangu/BackpagePix.

Jose Riveiro head coach of Orlando Pirates during the DStv Premiership 2022/23 match between Orlando Pirates and Kaizer Chiefs held at at FNB Stadium in Johannesburg on 29 October 2022. © Sydney Mahlangu/BackpagePix.

Orlando Pirates have been hit with a R200 000 fine by the PSL for their fans’ behaviour in the MTN8 semi-finals against Mamelodi Sundowns on 22 October.

Hundreds of fans invaded the pitch immediately after the game that saw Pirates thump Sundowns 3-0 to reach the final.

On the day, Kermit Erasmus opened the scoring before Monnapule Saleng netted a brace much to the delight of Pirates fans.

Pirates went on to lift the MTN8 trophy after beating AmaZulu in the final three weeks ago.

According to PSL prosecutor Advocate Zola Majavu, Pirates pleaded guilty to the charge, and they were fined R200 000 half if which is suspended for a period of 24 months.

Pirates were ordered to pay R100 000 plus 50 percent of the DC hearing costs for today (Monday).

Furthermore, Majavu, on behalf of the PSL, pleaded with the fans to refrain from behaving in the manner which Pirates supporters did going forward.

“I can confirm that Orlando Pirates Football Club earlier this morning appeared before the PSL DC to answer to spectator misbehaviour, in that there are spectators or fans or supporters invaded a pitch after the final whistle at the New Peter Mokaba Stadium on the 22 of October 2022,” said Majavu.

“They pleaded guilty as charged and in the result in having listened to the submissions by both parties’ representatives, the PSL DC sanctioned them as follows: