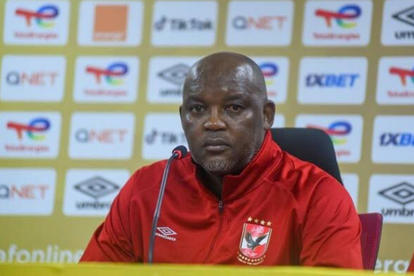 Peter Shalulile is reportedly wanted by Pitso Mosiamne at Al Ahly. This report is not really surprising at all, the striker has been burning hot.

We can all recall what was a massive saga where Al Ahly nearly secured the services of Gaston Sirino from Sundowns but the DStv Premiership champions refused to relent.

New reports now say that Pitso Mosimane has set his sights on the Namibian with 21 goals in 25 league games.

“The Siya crew has been informed that Al Ahly coach Pitso Mosimane has expressed an interest in Mamelodi Sundowns striker Peter Shalulile,” Soccer Laduma reported in their latest edition.

“Well-placed sources in Egypt have informed the Siya crew that Mosimane has expressed his desire to lure Shalulile to the reigning CAF Champions League winners at the end of the season.

“Shalulile still has three years left on his five-year contract with Sundowns, meaning that it would require a mammoth offer for the Brazilians, who are not a selling team, to consider parting ways with the player,” the report added.

Will the record 10-time African champions succeed in snatching a Sundowns key player this time? It really looks unlikely.