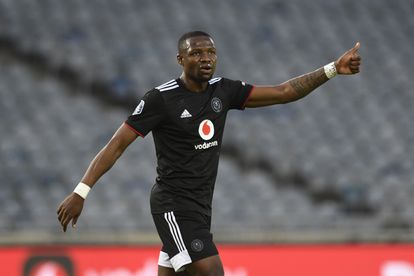 Tshegofatso Mabasa of Orlando Pirates during the DStv Premiership 2021/22 match between Orlando Pirates and Royal AM on the 28 October 2021 at Orlando Stadium, Soweto Pic Sydney Mahlangu/BackpagePix

Tshegofatso Mabasa of Orlando Pirates during the DStv Premiership 2021/22 match between Orlando Pirates and Royal AM on the 28 October 2021 at Orlando Stadium, Soweto Pic Sydney Mahlangu/BackpagePix

Orlando Pirates striker Tshegofatso Mabasa is reportedly desperate for a move away from Mayfair.

And with the arrivals of striker Bienvenu Eva Nga and Evidence Makgopa, his place in their match-day squad is under serious threat!

READ NOW: OUCH! Sundowns tell Pitso Mosimane: ‘thanks but no thanks!’

According to reports, the Orlando Pirates striker is ‘angling’ for a move to Cape Town City!

The Citizens qualified for the CAF Champions League after finishing in second place last season.

Reports suggest Mabasa is optimistic he can return to the Bafana Bafana squad if he shines for City on the continent.

According to FarPost, Mabasa is ready to make the switch to Cape Town ahead of next season.

The 21-year-old striker enjoyed a superb maiden season at the Buccaneers.

Peprah scored nine goals while assisting two more for the Mayfair side.

His hot form at Orlando Pirates has reportedly caught the attention of a Greek side!

The European club’s opening offer was reportedly rejected by the club, who value Peprah over R8 million!

“According to Siya sources, European imterest is rife in the Ghanaian.” a SoccerLaduma report read.

“Orlando Pirates recently received an offer for Peprah from a club in the Greek topflight. Pirates rejected the offer as it did not meet their financial evaluation of the player.

“The source further revealed that Pirates’ asking price for Peprah is around €500,000. While the offer coming from Greece fell way below that figure.

“Word reaching the crew is that Peprah is still a wanted man in Europe and enquiries about his availability have come in thick and fast.

“But with Orlando Pirates not keen to sell, it remains to be seen whether the Buccaneers cave in to the demand from Europe for their star striker.”

This comes just days after the club announced the axing of Thulani Hlatshwayo.

How do you rate the Buccaneers transfer business thus far? Let us know in the comments section below.

Comedian slammed for saying Lizzo looks like the ‘sh*t emoji’

Formula One: BAD news for hopes of a South African Grand Prix in 2023

Sport’s richest: The highest-paid athletes in the world revealed

Is dipping your face in ice water really an anti-aging secret?