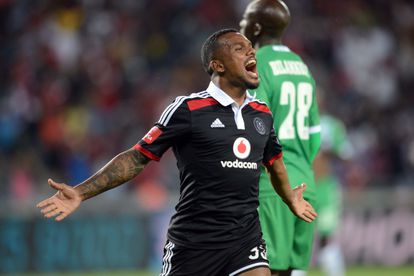 Kermit Erasmus of Orlando Pirates celebrates his team second goal during the Absa Premiership match between Orlando Pirates and Bloemfontein Celtic on the 20 December 2014 at Orlando Stadium. Photo: Sydney Mahlangu/BackpagePix

Kermit Erasmus of Orlando Pirates celebrates his team second goal during the Absa Premiership match between Orlando Pirates and Bloemfontein Celtic on the 20 December 2014 at Orlando Stadium. Photo: Sydney Mahlangu/BackpagePix

The Buccaneers completed the signings of Sipho Chaine, Ndabayithethwa Ndlondlo and Kermit Erasmus.

Erasmus had been linked with a move away from Mamelodi Sundowns after falling down the pecking order at the defending champions.

The Buccaneers confirmed the arrival of the former Bafana Bafana striker on a two-year.

According to Mamelodi Sundowns, Erasmus joined the Buccaneers on a free transfer as he was ‘released’ by the club. The player is valued at almost R8 million by Transfermarkt.

The prolific goalscorer was linked with a move to both Kaizer Chiefs and Cape Town City however the Buccaneers ultimately won the race.

Erasmus re-joined Orlando Pirates, who he scored 21 goals for during his previous stint with the club.

“Mamelodi Sundowns has parted ways with Kermit Romeo Erasmus who joined the Brazilians back in October 2020.” a club statement read.

“The enterprising striker’s contract was due to end in May and both parties have agreed on early termination to allow Kermit to get more game time elsewhere.”