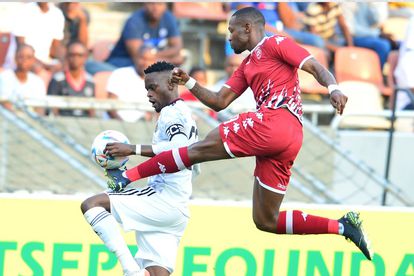 Orlando Pirates suffered a heartbreaking defeat as they were beaten 2-0 by Sekhukhune United in a league match played at Peter Mokaba Stadium on Tuesday.

Elias Mokwana opened the scoring in the 84th minute as he fired past Richard Ofori with a well-taken left-footed curler very late in the game.

There was still time for Sekhukhune United to make it 2-0 as Vusimusi Mncube to double the lead after Ofori’s howler outside the box.

As a result, Sekhukhune moved up to 12th on the log while remained third and still five points behind leaders Mamelodi Sundowns who are on 19.

Pirates made a number of changes from the team that played to a goalless draw with Sundowns, and those changes negatively impacted their play.

Jose Riveiro’s men looked flat in the first half with very few goalscoring chances created while the home side looked sharper in the process.

The second half saw Pirates get a red card as Thabiso Monyane was booked for the second time on the night.

Riveiro responded with four changes at once in an attempt to refresh the team, and add more firepower, especially in the final third.

It ttook 84 minutes for Sekhukhune to open the scoring, and it was Mokwana who brilliantly beat Deon Hotto before firing into the bottom corner of Ofori’s post.

Pirates needed a response, and they threw almost everyone forward but that left them exposed at the back.

Miguel Timm would play a back pass to Ofori deep into stoppage time after being put under pressure by Letsoalo.

However, Ofori made a mess of the back pass as he attempted to dribble, only for Mncube to capitalise on his heavy touch before firing into an empty to make it 2-0 to Sekhukhune.