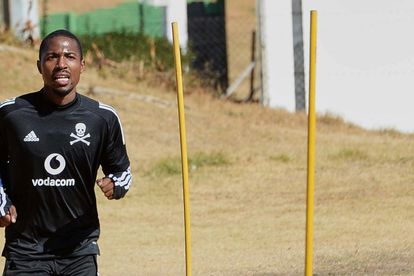 Orlando Pirates midfield recruit Bandile Shandu is aware of the battle he will have on his hands to nail down a place in the Sea Robbers XI.

Shandu joined Orlando Pirates having been out-of-contract following the end of the 2020/21 season which he spent with Maritzburg United.

The 26-year-old was impressive in the Team of Choice’s relegation battle, and reached an agreement to join Pirates long before the end of the term.

Despite that interest from Pirates, Shandu’s form and effort did not dip, indicative of the character of the man, and he intends to continue working hard to establish himself at the Soweto Giants.

“It’s difficult because of the quality Orlando Pirates has, but I’ll keep doing what’s worked for me ’til this point,” Shandu told Orlandopiratesfc.com.

“I always strive to work hard, do the basics right and follow the coach’s instructions.

“Just try and add value and do whatever is required by the team to the best of my ability.

“So, I’m just willing to do that and contribute to the team’s cause and make sure that we achieve a lot in the upcoming season.”

Shandu had spent his entire career to date at Maritzburg United and steps into the unknown as he joins one of South Africa’s biggest clubs. He said that expects a different kind of pressure in the Buccaneers camp.

“I played for Maritzburg United since I was just 17, so moving to another club was a bit of a first for me,” he said.

“So, I’m glad to have received a warm welcome from my new teammates as well as the coaches. That has made things easier and I’m really grateful for that.

“Pirates are a big club, one of the biggest in SA. So, I’m expecting a different type of pressure.

“I know there is a demand for results and I’m aware that I have to do my best to contribute to positive results for the team.”

Shandu has pledged to give his all for Orlando Pirates and there is at this stage no reason to doubt the commitment of the potential future star.

“I’m really honoured to be playing for Pirates. What I can promise is that each time I’m on the pitch. I’ll always give 100% and ensure that the fans are happy.

“It’s such a privilege and honor to be part of this great club. So, I’m really looking forward to the upcoming season.”