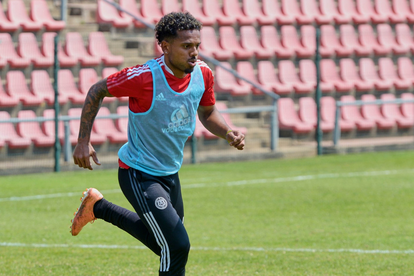 Nothing has revitalised Orlando Pirates fans alive this week like the news of Kermit Erasmus returning to the Sea Robbers ship. So how did it all unfold?

As The South African website reported last Thursday morning, and to the surprise of millions of local fans, Bucs announced Erasmus was back at the club.

According to reports, the move might have not happened without the sheer character and assertive actions of the 32-year-old forward from Gqeberha.

The decision-makers at Sundowns made a rather later decision, while the coaching staff learned of the news after the move was signed and sealed.

“Soccer Laduma has been informed that Erasmus’ attitude had a lot to do with the Downs hierarchy deciding to terminate his contract and forego inserting a clause that he could not join Pirates or Kaizer Chiefs,” the outlet said in their latest edition.

“According to sources at Chloorkop and close to Erasmus, the player had been resigned to waiting it out until the end of the season when his contract expires, but a high-ranking club official informed the Siya crew that his body language would not have been good for the dressing room.

“Erasmus insisted that he wanted to play, so in the end, the Downs management made a late call to terminate his contract, and there have been suggestions it’s unlikely there was a settlement involved in releasing the player to join the Buccaneers,” Soccer Laduma concluded.

PIRATES LINE-UP WITH ERASMUS AND NDLONDLO

So coach Jose Riveiro‘s team will be looking different as soon as this weekend. Erasmus and Nbabayithethwa Ndlondlo have arrived fit and ready to compete.

How does the line-up look with the two new attackers? Read the full story here.