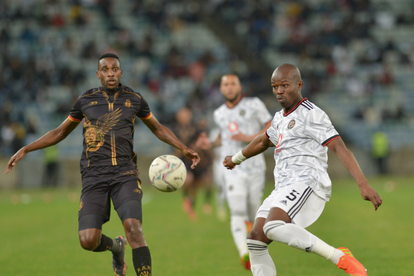 Orlando Pirates have clinched their second win of the season after beating Royal AM at the Moses Mabhida Stadium on Wednesday night.

As The South African website reported on Wednesday night, a first-half goal from Deon Hotto was enough to earn the Sea Robbers all three points.

The Namibian started his third game in his new wing-back position under coach Jose Riveiro. Let’s check out the player ratings.

Richard Ofori – 6: His distribution was not great, also made a mistake in the second half but was saved by Sibisi.

Nkosinathi Sibisi – 9: Nothing but calm, speed, and great tackles. Best singing so far.

Innocent Maela – 7: Did wonderfully to manage the spaces between him and Hotto.

Dean Hotto – 8: Made a handful of great runs but was let down by supply. Scored the winner after a well-timed run into the box.

Goodman Mosele – 8: Not many could have managed to break AM’s pressing but Mosele did a few times. A bit lucky to get the Man of the Match.

Kabelo Dlamini – 6: Bright start but has played too much football since the Swallows game on day one. Was taken off early in the second half.

Thembinkosi Lorch – 7: Wasn’t dangerous enough. Also has been playing every game since the start – a fourth start in 12 days.

Vincent Pule – 7: Came in and influenced the game. Nearly scored a superb free-kick but Xolani Ngcobo was equal to the shot.

Kwame Peprah -5: Did not have great touches. Looked low on confidence

Paseka Mako – Did not get enough action for a rating.

Bandile Shandu – Did not get enough action for a rating.

Coming up next for the Soweto giants is a trip to Gavin Hunt’s struggling SuperSport United on Sunday.

What is your take on Riveiro’s Pirates team so far? Please let us know in the comments section below.