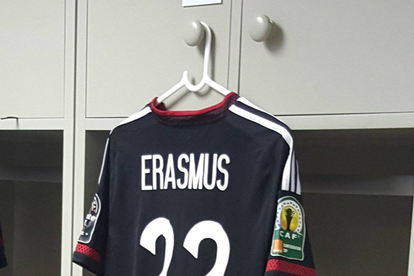 Orlando Pirates are yet to reveal which number Kermit Erasmus will be wearing this season. Image: @SoccerZela / Twitter

Orlando Pirates are yet to reveal which number Kermit Erasmus will be wearing this season. Image: @SoccerZela / Twitter

Orlando Pirates vs Mamelodi Sundowns is always worth canceling any other plans. It only happens at least twice a season where fireworks are always guaranteed.

The mighty Sea Robbers are hosting the first leg semi-final at the Orlando Stadium, before the DStv Premiership champions welcome Bucs to Tshwane next week.

The winner will battle either Kaizer Chiefs or AmaZulu in this season’s Wafa Wafa final.

In a build-up to the game, the Buccaneers dropped an interesting hint on some of the players that may be heavily involved.

The club posted a match promo that includes Kermit Erasmus and Thembinkosi Lorch, suggesting that the duo may start against the PSL champions.

Lorch, who has been missing due to a mysterious injury, is seen on the top left, while Erasmus is placed in the center of the graphic.

Check out the post below as posted by Orlando Pirates on Friday.

Saturday’s game will kick off at 15:30 from the Orlando Stadium.