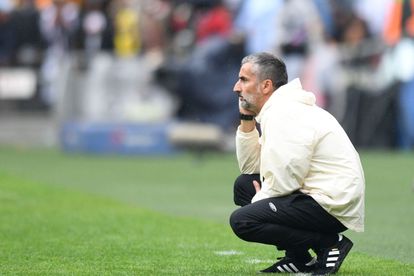 Jose Riveiro head coach of Orlando Pirates during the 2022 Carling Black Label Cupmatch between Kaizer Chiefs and Orlando Pirates on the 12 November 2022 at FNB Stadium in Nasrec © Sydney Mahlangu/BackpagePix.

Jose Riveiro head coach of Orlando Pirates during the 2022 Carling Black Label Cupmatch between Kaizer Chiefs and Orlando Pirates on the 12 November 2022 at FNB Stadium in Nasrec © Sydney Mahlangu/BackpagePix.

Orlando Pirates are still wounded. Losing 4-0 to Mamelodi Sundowns is nothing that manages to heal quickly.

The Sea Robbers coach Jose Riviero has said everything but question his players’ performances on the disastrous event.

“The players are not electronic devices that you can plug in, charge their batteries and be ready to play,” the Spaniard said as quoted by FARPost.

“All of them [players] have different issues, and we have to deal with different circumstances with the resources we have.”

The Pirates mentor went further to raise valid points about the practicality of the tournament, which many people have dismissed as a massive money windfall for the sponsors.

“Obviously two games, different starting line-ups and then 11 against 10 players and that numerical disadvantage we could not manage.

“Like I said, it is a particular tournament, and you can use the rules in the way that you want, we can do a lot of substitutions. We have 25 players on the game list.

“You can have players on the bench but that doesn’t mean that they are ready to play, we had to deal with the resources that we have.

“We managed to reach the final, but it was just too much for us. We will have decent time to rest and do other things with our lives, spend time with families and get the energy to be back soon and be ready to play against Sundowns again on December 31,” Riveiro concluded.