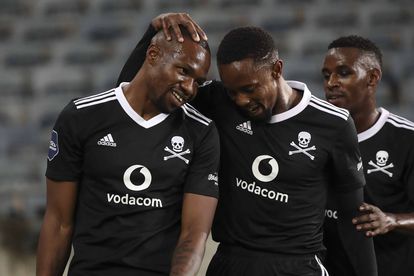 Tshegofatso Mabasa is Pirates only remaining player in the national side.

Pule is currently nursing an injury, the same niggle that saw him withdrawn from the side just moments before kick-off.

The Pirates forward was initially named in Broos’ side but had to pull out of South Africa’s double-header against Ethiopia. He was then ruled out the second game against the Africans and has been injured ever since.

According to the official Orlando Pirates website, Pule has suffered a Grade III tear of this quad and could be out of action for to up to 12 weeks.

READ | SHOCKING! BENNI MCCARTHY EXPOSES HORRIBLE TRUTHS: FROM A COVID TEST TO VIOLENCE AND WORRYING FOR THEIR LIVES

He is back on the pitch but has failed to give an explanation to coach Broos after his recent no-show. The national coach publicly stated that he would give the Pirates star a second chance. Under the condition that he contacts Broos explaining why he did not pitch to Bafana’s training sessions and apologizes.

Currently, Mosele has not explained his actions which is why he was dropped from the national side.