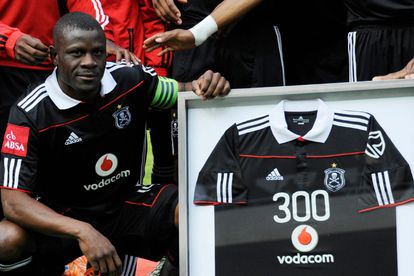 Bucs legend Lucky Lekgwathi has revealed how THREE Amakhosi legends played their part in assisting the growth of his newest venture.

He initially opened in Soweto but it was unfortunately destroyed by looters. Amounting to damages worth over R400 000 according to iDiskiTimes.

Thankfully, he had a very successful reopening recently thanks to the assist from Willard Katsande and support from Doctor Khumalo and Reneilwe Letsholonyane. Lekgwathi had this to say about Chiefs’ legends:

“It was nice to see my former coach Augusto Palacios, Dr Khumalo cutting the ribbon with me, the likes of Yeye Letsholonyane, my former teammates, Thandani Ntshumayelo, Thabo Matlaba and my MC of the day Brighton Mhlongo and my friends, Magents Edward Motale, you know the list is endless,

“My business partner met with him [Katsande] because he has a construction business so he said he can help us to set up the shop and the shop looks nice.” He’s done a great job, you know, with reasonable costs,” expressed Lekgwathi.

Grootman is up and running and is doing very well. Supporters of both of the Soweto giants flocking in numbers to check out Lekgwathi’s new restaurant.

It goes to show what the Soweto giants are capable of when teaming up. Will we see this potential unleashed by Warriors FC on Saturday?