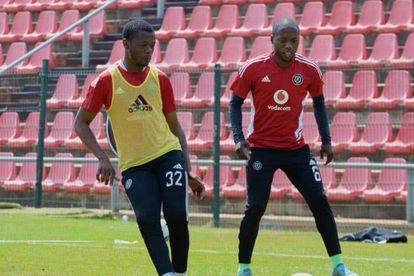 A former Orlando Pirates striker and PSL veteran with over 50 PSL goals has officially re-signed with the Buccaneers!

MUST READ: R13 MILLION ORLANDO PIRATES MIDFIELDER AT RISK OF LEAVING THE BUCS!

Ndumisa Mabena will call Orlando Pirates home going forward, according to Kick Off.

He has been training with Jose Riveiro and the Bucs for several months now.

The former Bucs striker will add to an already packed forwards department that includes Deon Hotto, Zakhele Lepasa, Kermit Erasmus and Bafana Bafana star Evidence Makgopa who is yet to make his presence felt.

Competition for places upfront will only heat up now that Mabena has signed.

Furthermore, he brings a lot to the table having bagged over 50 goals in his PSL career.

This does not bode well for other strikers who are likely to depart in January with Kwame Peprah, Terrence Dzvukamanja and Eva Nga looking more and more likely to leave the Bucs.

Mabena was even spotted celebrating with the Sea Robbers after their MTN8 triumph.

Meaning, he is a part of the team culture, understandably so, given that he has been training with the senior side for months. H

owever, is will not be all sunshine and roses for Mabena as the new Bucs striker has to contend with tremendous depth in this squad upfront.