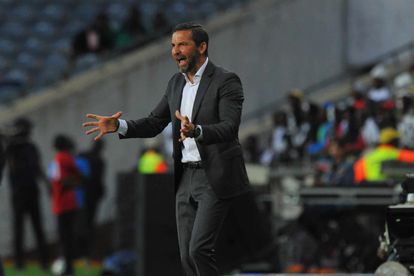 Orlando Pirates are not getting sucked into talk about the PSL title, despite getting closer to the log leaders.

Victory over Chippa United on Saturday sent Josef Zinnbauer’s men to within nine points of the table-topping Kaizer, who have a game in hand.

Despite seeing silverware on the horizon, the German was coy when asked to comment on the Buccaneers’ title prospect.

“We don’t talk about the title. We take it game by game and then we’ll see what happens at the end of the season and then we will see next season if we can talk about targets,” Zinnbauer told SuperSportTV on Saturday.

The win over the Chilli Boys was Pirates’ fifth on the bounce, after what was an inconsistent first half of the season.

Since Zinnbauer’s arrival, the Soweto Giants have won six out of seven matches, and remain unbeaten in the league since their last outing in 2018.

Zinnbauer was pleased to have secured another three points after what was a nervy finish to the game in Port Elizabeth, and has no illusions about how far the current Orlando Pirates squad is from the finished product.

“At the moment it’s not about what I want. We need a little bit of time. We’ve only been together for six weeks and this is a short time in football,” he continued.

“We have a lot of good players now, the squad is closer, the quality is starting to show and the system is in the minds of the players – that is important.

“Kaizer Chiefs, Mamelodi Sundowns and SuperSport United have very good squads and Kaizer Chiefs have a lot of points but we do our work.

“We work for three points game after game and then we’ll see what happens but for me, this is not the right time to talk about the title.”What’s important for me is to improve the team and I have been doing that and I’m very happy about it.”

Both Chiefs and Sundowns were inactive in the league over the past season.

The Tshwane Giants were involved in the Caf Champions League, where they beat Wydad Athletic Cub unbeaten, while their Soweto counterparts got were not engaged in any fixtures.

Chiefs remain at the top of the log with 45 points after 19 matches, followed by Pirates with 36 in 20 games, while Sundowns are a point behind after 18 fixtures played.