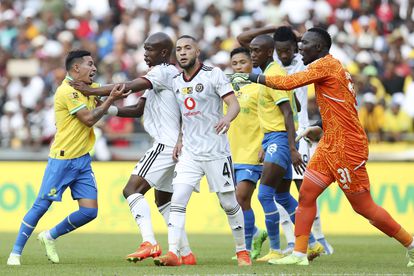 Pirates and Sundowns players argue during the 2022 MTN8 Semifinal match between orlando Pirates and Mamelodi Sundowns at the Orlando Stadium, Soweto on 1 October 2022 – Photo: Muzi Ntombela/BackpagePix

Pirates and Sundowns players argue during the 2022 MTN8 Semifinal match between orlando Pirates and Mamelodi Sundowns at the Orlando Stadium, Soweto on 1 October 2022 – Photo: Muzi Ntombela/BackpagePix

Orlando Pirates coach Jose Riveiro feels that his team failed to hurt Mamelodi Sundowns on the transitions in their MTN 8 semi-final first leg.

Transitions have become something of a buzz word in football but now as before opportunities arise on the pitch when you are able to get the ball off your opponent.

Pirates had several opportunities to make Sundowns pay for losing the ball in the first half of the match, which the coach would lament in his post-match comments.

A game of two halves

Riveiro feels that a failure to make those chances count allowed Sundowns to grow into the game and make more of the play in the second half.

“I think the first half was really under control, we didn’t suffer so much or at all I have to say, to control the situation in our offensive phase.

“And we got also in attack to create some problems, we were really not [clinical] in our transitions in the first half.”

Riveiro admitted that the second half was an uphill battle with Sundowns playmaker Teboho Mokoena giving them serious headaches in midfield.

The tight contest has now set up a second leg that could be equally cagey.

“Second half they started better or I have that feeling the beginning was better, Mokoena was creating problems for us to defend, we became a bit low in our block,” Riveiro added.

“But after we correct the situation, okay there’s always threats with Shalulile running behind and they brought a lot of quality from the bench as well.

“But overall I think the game that everybody expects, equal and with Pirates showing that we can compete also in these types of games, we’re going serious.”