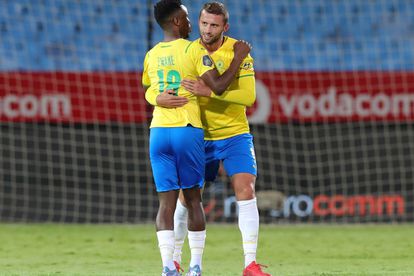 The Mamelodi Sundowns juggernaut kept rolling on Friday with a dominant victory over Orlando Pirates in their DStv Premiership clash. Photo: Twitter @Masandawana

The Mamelodi Sundowns juggernaut kept rolling on Friday with a dominant victory over Orlando Pirates in their DStv Premiership clash. Photo: Twitter @Masandawana

The Mamelodi Sundowns juggernaut kept rolling on Friday with a dominant 4-1 victory over Orlando Pirates in their DStv Premiership clash at Loftus Versfeld.

Themba Zwane, Pavol Safranko (2) and Peter Shalulile were all on target for Masandawana, who now boast 13 wins and four draws from 17 matches played this season.

A fifth consecutive league title looks a mere formality for the Tshwane giants as they have now opened up a yawning 18-point lead over nearest r challengers Kaizer Chiefs.

Incredibly, the match was goalless at the half-time break.

However, things changed rapidly after the interval as Mamelodi Sundowns scored four goals in a dominant half of football.

The home side opened the scoring in the 51st minute when Lyle Lakay floated a free-kick into the box that found the head of Shalulile who headed across goal to allow Zwane a simple tap-in.

It was a landmark moment for the midfielder as it was his 50th goal for the Brazilians.

Mamelodi Sundowns doubled their lead 10 minutes later from another set-piece as Lakay whipped in a corner that saw substitute Safranko send a powerful header past Orlando Pirates goalkeeper Siyabonga Mpontshane.

It was 3-0 after 73 minutes when Zwane played a through ball to Shalulile who was brought down by Mpontshane, but Safranko was on hand to finish and complete his brace.

Shalulile scored the fourth goal of the match in the 76th minute with Lakay completing a hat-trick of assists. The star left-footer again found Shalulile on the far-post who made no mistake finding the back of the net.

Fortune Makaringe scored a consolation goal for the Buccaneers in injury time, as the Soweto club remained third in the standings, one point behind bitter rivals Kaizer Chiefs.

Orlando Pirates have now lost 23 league matches against Mamelodi Sundowns, more than they have against any other opponent since the PSL era kicked off in the 1996/97 season.