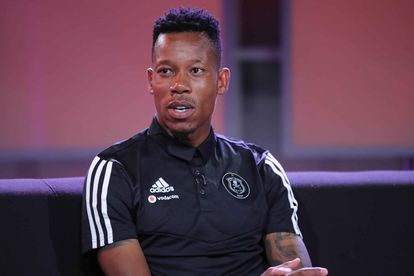 Orlando Pirates captain Happy Jele doesn’t think the fact that Mamelodi Sundowns have been unstoppable this season means they are unbeatable.

The two teams will battle for the remaining spot in the Nedbank Cup semi-finals on Thursday.

Kick-off at Loftus Stadium is at 6PM.

Jele said, as Pirates players, they told themselves to change their mindset and fight for every trophy available to them this season.

According to Jele, the most important thing for the Buccaneers going into this game is to win at all cost without even looking at how well Sundowns have done thus far.

“Obviously, we are also playing for a big team. We want to win things and we told ourselves that we need to change our mindset,” Jele told reporters.

“We’re going into another competition. We have done it before and we want to do it again.

“So, our focus is on the Nedbank Cup and we want to push all out because it’s either you win or you lose. The most important thing is that we want to be winners on the day,” he added.

Pirates have already won the MTN8 this season; their first major trophy in six years – and Jele said the team has a responsibility to win trophies every season.

The 34-year-old skipper further added that the club has been good to the players and they want to repay the management by adding more silverware to the trophy cabinet.

“This team has a huge and massive responsibility to win trophies and you know, it starts at training,” continued Jele.

“We put effort and perform for the team.”

“This season, we have done it and now, it’s time that we must continue to do it, to put more trophies in the office because the team is doing so much well for us as players,” concluded Jele.

The winner between Pirates and Sundowns will face Tshakhuma Tsha Madzivhandila (TTM) in the Nedbank Cup semi-finals.