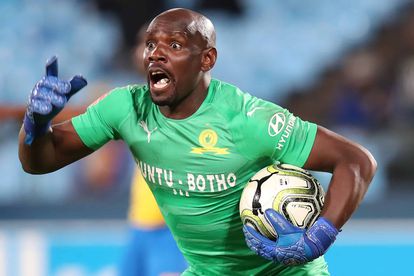 Zambia goalkeeper Kennedy Mweene made a brilliant late save to ensure Mamelodi Sundowns held on for a 3-2 win over Chippa United on Tuesday and a share of the South African Premiership lead.

Defending champions Sundowns joined Orlando Pirates on 50 points with three rounds remaining and the latter occupy first place because they have a superior goal difference.

Veteran Mweene dived to make a one-hand block in stoppage time as relegation-threatened Chippa sought an equaliser that would have given them a point they would not have deserved.

Had Sundowns been more clinical, they could have won by at least three goals, but striker Lebohang Maboe disappointed, constantly passing on possession when favourably positioned to shoot.

Chippa took a shock lead on 25 minutes as Mark Mayambela completed a counterattack by turning inside the box and firing past Mweene.

Sundowns captain Hlompho Kekana levelled two minutes before half-time with a bullet header from a free-kick by Uruguayan Gaston Sirino.

Sirino was also involved in the two second half goals that ultimately proved vital as Sundowns chase a record-extending ninth Premiership title.

Tebogo Langerman ran on to a pass from the South American and crossed for Sibusiso Vilakazi to put the 2016 African champions ahead.

Sirino made it 3-1 on 69 minutes by slamming a low shot across goalkeeper Mbongeni Mzimela and into the far corner for his fourth league goal this season.

Chippa were struggling and Sundowns wasted several good chances to go further ahead before a late rally by the visitors led to Rhulani Manzini pulling one goal back on 85 minutes.

Mweene then rescued Sundowns, who left Johannesburg a few hours later for Morocco, where they face Wydad Casablanca on Friday in the first leg of a CAF Champions League semi-final.

Defeat left Chippa outside the relegation zone only on goals scored with Baroka FC and Maritzburg United beneath them.