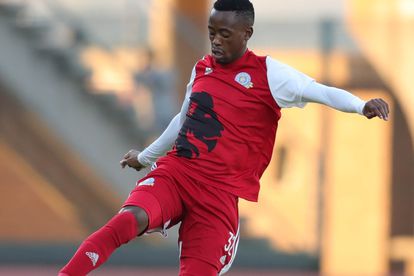 AFCON | QUESTIONS ASKED OF REFEREE AT CENTRE OF BAFANA CONTROVERSY

The Team of Choice on Friday announced that former Mamelodi Sundowns midfielder Nicholus Lukhubeni would be joining their ranks.

A loan-deal was completed for the 25-year-old Lukhubeni, who played the first half of this season on loan at Sekhukhune United.

In addition to Lukhubeni, Maritzburg United also confirmed the acquisition of Royal AM forward Tumelo Njoti.

The KwaZulu-Natal side earlier in the month signed Lucky Baloyi, Tawande Macheke, Friday Samu, Genino Palace and Steven Pereira in a bid to avoid relegation from the DStv Premiership this season.

Maritzburg United are struggling in the league standings

Maritzburg United currently find themselves in 13th place in the 16-team DStv Premiership standings with 15 points after 18 matches.

They are only two points ahead of bottom side TS Galaxy – and have played one more match.

Maritzburg United will next be in action in a Nedbank Cup Round of 32 clash at home against SuperSport United on Wednesday, 9 February at 18:00.

Their next league assignment is coincidently also at home against Matsatsantsa on Tuesday, 15 February at 17:00.