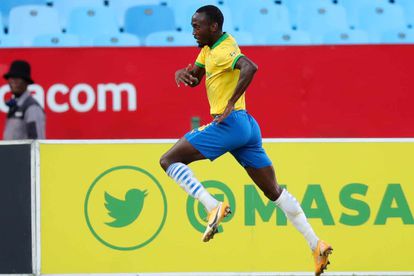 Mamelodi Sundowns are the first PSL team to reach and surpass the 50-point mark following their 3-0 win over TS Galaxy on Wednesday.

Khuliso Mudau, Haashim Domingo and Peter Shalulile netted for the Brazilians on the night.

Sundowns went into the encounter without a few of their star players, including Themba Zwane, Denis Onyango and Andile Jali.

However, those who were given a chance really rose to the occasion as they stepped up and showed class throughout the game.

It took the Tshwane giants just 19 minutes to take the lead through Mudau whose beautiful curler sailed past Wensten van der Linde.

Things went from bad to worse for TS Galaxy as Lindokuhle Mbatha was given his marching orders 22 minutes into the game.

Sundowns then dominated the game as expected, giving Galaxy no space to get behind their defence.

Mudau’s goal proved the difference at the end of the first 45 minutes, and Sead Ramovic knew he needed to box smart in the second half.

TS Galaxy held their own at the start of the second stanza, but they could only manage to soak up the pressure for close to 20 minutes.

And soon afterwards, Domingo unleashed a rocket from outside the box – a goal similar to that of Mudau and thus, giving Van der Linde no chance.

With 10 minutes to go, Shalulile registered his name on the scoresheet following a delightful cross into the TS Galaxy box by substitute Divine Lunga.

The win saw Sundowns move to 51 points on the log from 22 league games – and therefore, become the first team to surpass the 50-point mark this season.