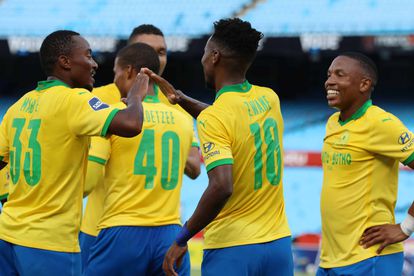 Themba Zwane of Mamelodi Sundowns celebrates goal with teammates during the DStv Premiership 2020/21 match between Mamelodi Sundowns and AmaZulu at the Loftus Versveld Stadium, Pretoria on the 22 November 2020 ©Muzi Ntombela/BackpagePix

Themba Zwane of Mamelodi Sundowns celebrates goal with teammates during the DStv Premiership 2020/21 match between Mamelodi Sundowns and AmaZulu at the Loftus Versveld Stadium, Pretoria on the 22 November 2020 ©Muzi Ntombela/BackpagePix

Mamelodi Sundowns have reportedly agreed on a new deal with one of their star attackers who has been consistent over the last seven years or so.

According to Unplayable, both Sundowns and Themba Zwane have reached an agreement after weeks and months of negotiating the deal.

It has now emerged that Zwane will sign a two-year deal with an option to renew for a further year, meaning the attacker will be at Sundowns until June 2024.

At that time, Zwane would be 34, and he could remain a Sundowns player at least until he’s 35 depending on whether or not they take up the option.

Zwane has been a stalwart for Sundowns since the 2013-14 season when Pitso Mosimane decided to recall him from Mpumalanga Black Aces.

The Tembisa-born attacking midfielder has gone on to make 327 appearances for Sundowns while scoring 71 goals and providing 51 assists.

He has won all the domestic trophies on offer with the Brazilians, while also scooping a number of top individual awards for his efforts.

Sundowns were undoubtedly never going to let Zwane leave for any club as he’s one of the senior players in the current squad and understands the culture of the club.