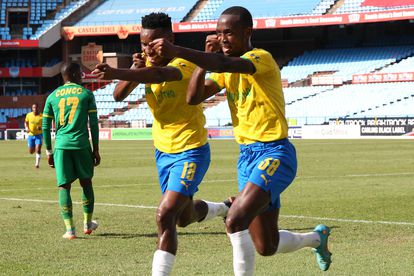 Shalulile entered the PSL history books with another hat-trick in the win over Golden Arrows last week, which came after he had already netted three goals in Sundowns’ 4-2 win away to Swallows FC the week before, becoming the first player to score a hat-trick in the Premiership this season.

Shalulile is in pole position to clinch the Lesley Manyathela Golden Boot award this season as he’s now currently sitting on 21 goals after his latest heroics.

The playmaker is also now on track to surpass Collins Mbesuma’s all-time record of 25 league goals in a single season, while Shalulile is also the first PSL player to score 20+ league goals since the 2011/12 season when Siyabonga Nomvethe scored 20 goals for Moroka Swallows.

Understandably, offers from within South Africa, and abroad, are said to have poured in for Shalulile, according to a Phakaathi report.

Just as understandably, though, Sundowns aren’t expected to be willing to lose the services of the superstar playmaker.

“There have been a few offers for Peter, some coming from rivals on the African continent but most of these offers are from abroad,” said a Phakaathi source at Chloorkop.

“But none of them are enticing enough for Downs to consider selling Shalulile because what is the point for him to leave and go play in Scandinavia? If money is the problem, that can be easily sorted out.”

You can watch his latest hat-trick heroics below: