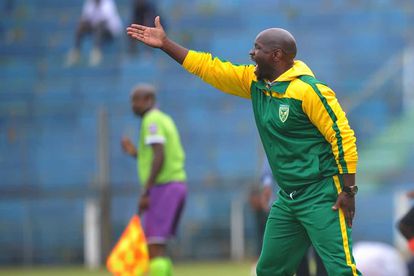 Steve Komphela is a man who takes the philosophical side of football quite seriously and, earlier in the week, he unleashed another gem with his “short blanket” theory, which he was kind enough to share with Mamelodi Sundowns coach Pitso Mosimane.

Komphela’s Lamontville Golden Arrows were the Brazilians’ penultimate opponents in the 2018/19 season, as the two sides met at Loftus Versfeld on Tuesday night just days prior to the hosts clinching a record ninth PSL title.

Moments before kick-off, the two coaches – famous for their quirky soundbites – shared a light moment, with the former Bafana skipper dominating the conversation.

Komphela took issue with the composition of “Jingles'” lineup, which he felt had too many attacking players, while his was more defensively inclined. That is when he brought up the “short blanket”, warning his opposite number that the tactic might leave him exposed at the back.

His explanation was vintage Bra Steve;

However, with a squad as big as that of the Tshwane giants, all bases were covered, as Abafana Besthende were caught on their heels early on, and did not recover – eventually crashing to a 2-0 defeat.

The victory saw the Brazilians capitalise on an earlier slip-up from title rivals Orlando Pirates to top the log, and they maintained that position in the crucial game against Free State Stars – clinching the title with a 1-0.

Kaizer Chiefs target is up for sale according to coach

Daily devotion: Your bible verse and prayer for 05 January 2023