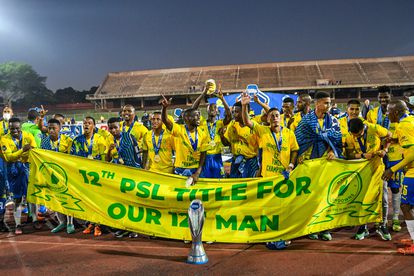 Mamelodi Sundowns maintained an astonishing final-day-of-the-season record on Monday, 23 May against Royal AM. Photo: Twitter @Masandawana

Mamelodi Sundowns maintained an astonishing final-day-of-the-season record on Monday, 23 May against Royal AM. Photo: Twitter @Masandawana

Mamelodi Sundowns‘ dominance on the pitch during the 2021-22 PSL has earned them millions of Rands from the league and its sponsors.

The Brazilians have banked a whopping R44.5 million from the recently concluded season that saw them win the treble.

Sundowns first won the MTN8 at the start of the season before winning the league title with four games to spare. This was followed by the Nedbank Cup title.

Along the way, Sundowns picked up two Q-Innovation prizes for dominating the league, and that came with R1.5 million each.

Now, Sundowns have been confirmed as the winners of Q-4 Innovation, meaning they have won another R1.5 million to take their Q-Innovation prize money for the season to R4.5 million.

In addition to that, Sundowns also earned R10 million for their efforts in the CAF Champions League where they exited the competition at the quarter-final stage.