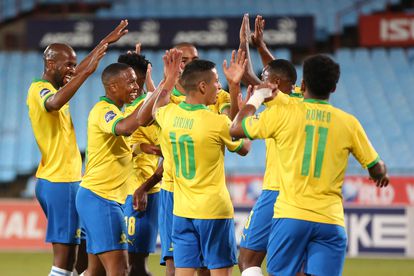 Mamelodi Sundowns got their title defencing off to a winning start by beating AmaZulu 1-0 in a match played at the Loftus Stadium on Friday.

READ | AS IT HAPPENED: MAMELODI SUNDOWNS VS AMAZULU

Themba Zwane scored the only goal of the game from the penalty spot in the first half, and the goal proved enough to earn Sundowns all three points.

In what was a very tactical encounter, Sundowns showed class as they dominated possession from the word go, winning five corners inside the opening 12 minutes.

However, they couldn’t turn that into clearcut goalscoring chances while AmaZulu also couldn’t penetrate the Sundowns defence.

Ironically, there were no shots on target by neither side until Sundowns won the penalty in the 44th minute when Peter Shalulile was fouled by Thembelani Sikhakhane.

READ | ORLANDO PIRATES LET THE CAT OUT OF THE BAG, BEAT KAIZER CHIEFS TO LOCAL ATTACKER!

Zwane stepped up and sent Veli Mothwa the wrong way to hand Sundowns the lead before the break.

AmaZulu came back fired up from the break, and they nearly got the equalizer immediately after the restart.

READ | KAIZER CHIEFS BACK IN THE ‘BIG LEAGUE’ WITH FIVE PLAYERS IN BAFANA BAFANA SQUAD!

Sphesihle Maduna’s attempted cross went straight into goal but Kennedy Mweene was well-positioned to tip the ball over the crossbar for a corner.

Both teams made changes with 25 minutes remaining on the clock, as Tshepang Moremi and Lehlohonolo Majoro entered the field for Keagan Buchanan and Bingi Ntuli respectively.

Sundowns made a change of their own as Aubrey Modiba made way for Gaston Sirino for his first appearance of the season.

AmaZulu had an opportunity to make it 1-1 after some sloppy defending by Sundowns but Sikhakhane couldn’t get the ball over the goal line as Rushine de Reuck cleared off the line.

Mothobi Mvala had the biggest chance to double Sundowns’ lead a few minutes afterwards but his final touch was just too heavy with only Mothwa to beat.

Ultimately, Sundowns walked away with all three points and a clean sheet to start off the 2021-22 DStv Premiership season.