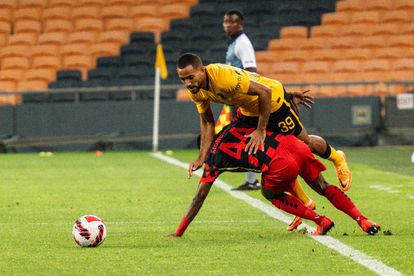 Kaizer Chiefs dropped two points at home against TS Galaxy as both teams played to a goalless draw at the FNB Stadium on Tuesday.

Khama Billiat was a notable absentee for Stuart Baxter’s as he was serving a one-match ban, and his absence was hugely felt.

Chiefs had a promising start to the first half with Keagan Dolly, first, forcing a save out of TS Galaxy goalkeeper Melusi Buthelezi before firing wide minutes later.

Dolly proved too much to handle for TS Galaxy as he went through on goal after Pogisho Sanoka was dispossessed of the ball in his own half.

However, the left-footer’s first touch let him down and allowed Buthelezi to rush off his line and pick the ball up without any pressure.

Chiefs goalkeeper Brandon Petersen had some work to do midway through the first half as he denied Kerebotse Mongae with a good save.

Augustine Kwem also saw his shot go wide of Petersen’s goal minutes later after some sloppy defending by Chiefs in front of their own box.

Chiefs nearly got the breakthrough on the stroke of half-time as Samir Nurkovic connected with Reeve Frosler’s cross but his header was brilliantly palmed away for a corner by Buthelezi.

The second half saw both teams taking a go at each other but TS Galaxy had a few good chances with Lindokuhle Mbatha and Mlungisi Mbunjane taking shots at goal.

Chiefs players got frustrated as the game went on with Bernard Parker and Dolly getting themselves booked by the referee.

Baxter then made three substitutions at once with Daniel Cardoso, Sabelo Radebe and Nkosingiphile Ngcobo all entering the field in the 65th minute.

Ngcobo’s first attempt at goal came 10 minutes later as he shot from range but Buthelezi made a comfortable save.

Frosler then got himself booked as TS Galaxy again showed signs of wanting to frustrate Chiefs in the latter stages of the game.

Petersen made a comfortable save four minutes from time, denying Lekay who attempted a shot from range as Chiefs made it hard for TS Galaxy to get behind their defence.

TS Galaxy survived a scare deep into stoppage time as Ngcobo hit the upright and the ball back into play but Chiefs failed to capitalise.

And that’s how it ended, and Chiefs would be disappointed with the two points dropped against a struggling TS Galaxy team.