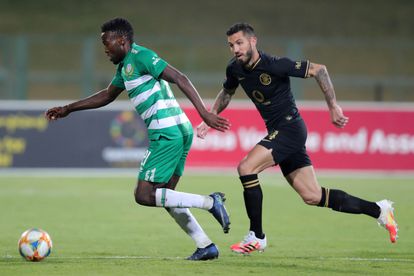 Kaizer Chiefs are set to miss out on signing Royal AM striker Victor Letsoalo with the transfer deadline closing in the coming hours!

The Amakhosi were tipped to sign one more striker given the fact that Leonardo Castro is out with a long-term injury however Bafana Bafana striker Victor Letsoalo has ruled himself out of a move away from Royal AM.

Letsoalo has been one of the most consistent strikers in the PSL over the previous two seasons and subsequently saw himself break into the Bafana Bafana setup last year.

He scored 11 goals last season for Bloemfontein Celtic while registering a further three assists and was linked with a sensational move to Kaizer Chiefs however it looks unlikely to happen during the current transfer window.

Victor Letsoalo rules himself out of move to Kaizer Chiefs

“I’m going to stay with Royal AM. I’m very excited going into this season, I want to play regularly like I did last season at Bloemfontein Celtic. It’s important to get that game time to score goals.” Kaizer Chiefs’ reported transfer target Victor Letsoalo told Kick-off.

“I’m looking forward to being in the Bafana squad too, it shows I have the potential to compete with the best players in the country. It gives me confidence going into the new season, I just have to apply myself well going forward.

“I don’t want to speak about the offers (Kaizer Chiefs amongst others) that were made, I just want to focus on my football now, it’s a new season for everyone and I need to start over.”

While Letsoalo has ruled himself out of a potential move to Kaizer Chiefs, Stuart Baxter’s side may very well miss out on signing a new striker given the fact that the transfer window closes at midnight tonight.