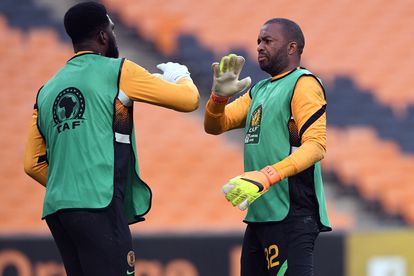 Kaizer Chiefs goalkeeper Daniel Akpeyi will be leaving Naturena to do battle for the Nigerian national team later this month.

The Amakhosi goalkeeper has been named in the Super Eagles squad that will face Ghana in their FIFA 2022 World Cup Qualifier playoff clash.

Despite his recent lack of game-time, Kaizer Chiefs goalkeeper Daniel Akpeyi was named amongst three Nigerian goalkeepers that will travel to Abuja and the Cape Coast for the respective matches.

The two legged, home and away tie will see Ghana and Nigeria square off for a place at the prestigious 2022 Fifa World Cup which takes place in Qatar later this year.

While Kaizer Chiefs will be able to celebrate following the inclusion of Daniel Akpeyi in the Nigerian squad, Orlando Pirates won’t be too impressed after star defender Olisah Ndah was dropped from the national team.

The duo both traveled to Cameroon to represent the Super Eagles in January at the 2021 Africa Cup of Nations tournament.

Daniel Akpeyi is yet to feature for Kaizer Chiefs since returning from the 2021 AFCON tournament in Cameroon.

Stuart Baxter has preferred to make use of Brandon Petersen in goal and after a string of solid performances, he too has earned a national team call up ahead of Bafana Bafana’s friendly clashes against Guinea and France later this month.

‘Hard to kill me’: Was Andrew Tate hospitalised?