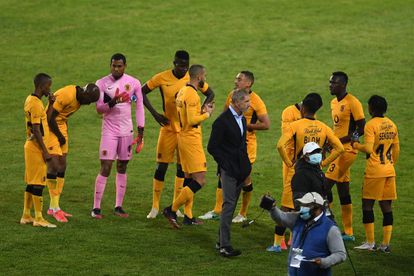 Stuart Baxter with his Kaizer Chiefs side

Stuart Baxter with his Kaizer Chiefs side

Bafana Bafana and Kaizer Chiefs star Sifiso Hlanti has reportedly returned to training after a lengthy spell on the sidelines due to injury.

The former Bidvest Wits defender has been out injured since the end of October 2021 with an achilles injury.

According to reports, the experienced Kaizer Chiefs defender has returned to training and could feature for both Bafana Bafana and the Glamour Boys in March.

Kaizer Chiefs star returns to training after FOUR months out!

Hlanti’s return will not only mean there’s more competition for places at Naturena, but within the national team too.

Sources have claimed that Bafana Bafana head coach Hugo Broos has already contacted the Kaizer Chiefs star over his availability for next months clash against World Champions France!

“He has been phoned by the coach to ask how he feels and if he could be called up to the team. Obviously Hlanti said ‘yes’ because he has started training and should be fully fit by the end of March,” a source told Citizen.

“I feel so sorry for Sifiso. This morning we did a walk-through drill, we went into a handball drill and we went into 11 vs 11 for 15 minutes, just to put down some patterns and tactical things for the game,” the Kaizer Chiefs head coach said at the time.

“We had done everything, we’re in the last two minutes of the 15 minutes play, get a long cross for your pass, he was back paddling and he put his foot up behind him and I’m not joking, everyone within 20 meters heard it, like a pistol shot.

“He went off and when I came off the field the medics said it’s a total rupture. I’ve had the same operation, he’s not going to be back for Kaizer Chiefs for about six months.”