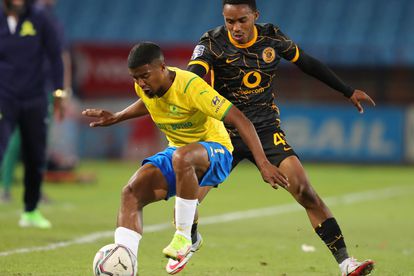 The Kaizer Chiefs and Njabulo Blom saga has taken yet another twist!

According to reports, the Glamour Boys are hoping to keep onto their golden boy by extending his contract at the club.

This will come at a price for the Motaung’s as they’ll have to significantly increase Blom’s salary to fend off interest in the 22-year-old.

According to reports, Kaizer Chiefs are considering balancing the books by letting one of their highest earners leave the club next season!

“A potential significant increase in Blom’s package could have knock-on effects on whether Amakhosi keep some of the other stars, whose contracts are coming to an end when the current season concludes.” – SoccerLaduma report read.

”Star forward Khama Billiat, in particular, has a contract that is up for renewal in the winter and as one of the big earners at the Glamour Boys, who is struggling for form, could be sacrificed.

“Billiat has also not been the same since recovering from injury, as he is yet to score this season in 11 official appearances in all competitions.”

In other news, former Kaizer Chiefs wizard Jabu Mahlangu has echoed the sentiments of Brian Baloyi regarding Financial Fair Play in the PSL!

Amakhosi legend Brian Baloyi came under fire recently for claiming the only way to make the PSL competitive again is to introduce FFP rules.

Mamelodi Sundowns have won five league titles in a row with their most recent one coming in last season’s treble.

Sundowns have dominated the Premier Soccer League but this hasn’t come cheap for the Brazilians.

What FFP simply means is preventing teams from spending more than they earn.

And now Mahlangu has urged the league to take measures to prevent it from becoming redundant.

“I think it’s high time the PSL and Safa sit down and find a way to implement financial fair play rules in our local league, just like in Europe.” the Kaizer Chiefs legend said as quoted by IOL.

“In Europe, these rules already exist and I feel like Sundowns are negatively impacting the balance of the league. Yes, they have the financial muscle to do it, but it weakens the league because they buy all the superstars.

“I don’t want to take anything away from Sundowns, they have a great team and they play great football. But imagine if all the superstars at Sundowns were playing week in and week out? That would strengthen our national team.”