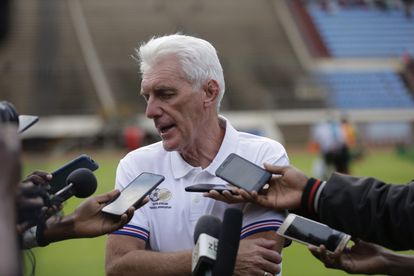 Kaizer Chiefs and Orlando Pirates are currently in the midst of an ongoing saga with their top Bafana Bafana players.

Bruce Bvuma is struggling for gametime at Chiefs. He has also seemingly fallen down the pecking order at the club.

Stuart Baxter has opted for Daniel Akpeyi well making it clear that Khune will have another big chance. This, after Khune displayed fine form that was influential to Warriors FC’s triumph in the DStv Compact Cup.

READ | KAIZER CHIEFS: OPPORTUNITY TO MEET YOUR AMAKHOSI HEROES AT YOUR HOUSE!

Brandon Peterson has also staked his claim for the Chiefs number one jersey, according to KickOff.

So, what now for Bvuma? He is still contracted to Amakhosi but he will need regular gametime if he is return to Bafana Bafana. Baxter will have to consider this when looking at Bvuma’s future.

On the other side of Soweto, Orlando Pirates have been linked with Bafana captain Ronwen Williams.

He is contracted to SuperSport United until 2023. However, with the retirement of one of their legends, they are prepared to dig deep into their pockets to secure his services.

Williams would be a massive signing for Pirates. He has been in excellent form for Bafana Bafana and is a true leader.

Bvuma, Williams’ replacement in the national team, needs gametime and may consider a move elsewhere if he doesn’t get it.