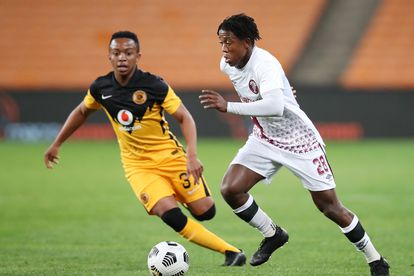 The diminutive Ngcobo enjoyed a wonderful breakthrough season for the Glamour Boys last year after being thrown into the deep end by Gavin Hunt.

The 22-year-old attacking midfielder put on a number of stellar performances in the CAF Champions League as well as the DStv Premiership for Kaizer Chiefs.

He however has struggled for consistent game-time under Stuart Baxter this season which may impact his pending move to Belgium according to reports.

“There is believed to have been an exchange of emails between middle-men who are interested in bringing Ngcobo to Belgium and his agent,” An unnamed source told Kick-off.

“An official offer is expected to be submitted to Kaizer Chiefs soon. The only big worry now is that he is not getting more game-time at Chiefs at the moment.”

Nkosingiphile Ngcobo was rewarded for his stellar performances last season with the famous Kaizer Chiefs number 12 jersey. While much was expected of him this season, his limited game-time has ultimately slowed down his progress.

“I am happy to be wearing jersey 12 because I’ve been told that it’s an iconic jersey for the club and I’m willing to work hard and do my best,” Ngcobo said at the beginning of the current campaign.

“I specifically know that coach Donald ‘Ace’ Khuse wore jersey number 12 at Kaizer Chiefs and he’s a legend of the club. I need to work hard to ensure my name is included in the list of those who made the jersey number famous.”