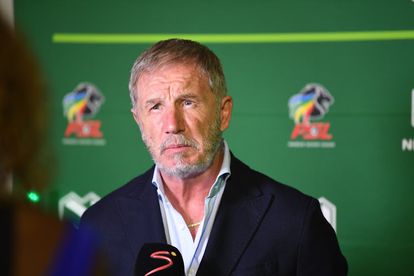 After largely dominating the first half of the DStv Premiership with just one loss from 19 games, the Pretoria club terrified the Soweto giants by going on to add even more top talent in January.

According to Kaizer Chiefs coach Baxter, Amakhosi can’t launch a direct fight against such spending power.

“We will compete with them (Sundowns) but when they have spent over R40 million in this window I don’t think if we go and open a direct fight…if it is a question of who is going to put the most cash out, I’m sure that Sundowns have an advantage over most teams and not just Kaizer Chiefs,” Baxter.said via Kick Off.

“What I said is that we won’t add players to the squad unless it is value for money. Unless we think we are paying the chairman’s hard-earned money and we are getting a player that will strengthen the squad.

“I said in many cases we can’t compete with Sundowns because they just throw more money than we do. Of course, we want to compete with them, but we are obviously aware of their huge financial advantage.”

TS Galaxy’s shock victory over Amakhosi in the Nedbank Cup left Stuart Baxter pained by the low quality of his side.

While the result was only 1-0, the scoreline hardly reflects the real story of the game. Sead Ramovic’s TS Galaxy dominated the Glamour Boys from the first minute to the last.

Had it not been for the brilliance of goalkeeper Brendon Petersen, the scoreline could have been a lot worse. The Mpumalanga club created a plethora of chances and shots on target, but the Ajax Cape Town academy graduate proved why he was signed by the biggest club on this land. Read the full story here.