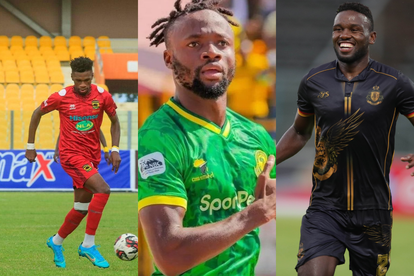 One of these strikers could be wearing the famous gold and black. Image: @Twitter

One of these strikers could be wearing the famous gold and black. Image: @Twitter

Kaizer Chiefs could go crazy and announce 10 more players but that would leave an extreme imbalance if none of those players are centre forwards.

The Soweto giants are in need of a striker or two.

WHY KAIZER CHIEFS WILL SURELY SIGN AT LEAST ONE STRIKER

Having released a long list of players that include defenders, midfielders, and forwards, Amakhosi have made several replacements, but in the frontline positions.

Samir Nurkovic and Leonardo Castro are included in the departed list, and the new striker Ashley Du Preez is only a partial replacement.

The former Stellenbosch FC is nowhere near Nurkovic and Castro as far as his playing style as a nine.

These are therefore the reasons why Arthur Zwane’s next signing should indeed be a center forward.

The Ga-Molepo-born star stood out last season with 17 goals in 31 games.

The Cameroonian is in demand after smashing in 21 goals in 30 games in the Ghana Premier League, but can he do the same in the PSL?

Mayele’s most recent stats in the Tanzanian Premier League are unavailable, though he delivered three goals and three assists in the 2020/21 CAF Champions League.

The Glamour Boys now have four weeks to sign a new nine before the season starts in the first week of August.