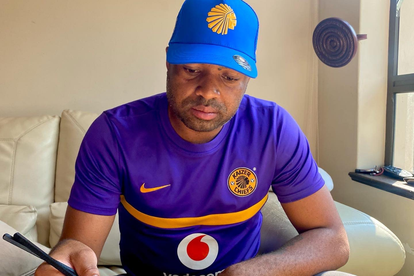 So legendary, he can eat his name? Kaizer Chiefs star Itumeleng Khune recently enjoyed what you can call the Itu Khune sushi.

Without giving any story details behind the photo, Khune uploaded himself wearing a Kaizer Chiefs cap and top while busy with a special dish.

On the plate, we see a large sushi dish, with the two biggest chunks featuring the letters ITU KHUNE on them.

Meanwhile, the 34-year-old goalkeeper is not yet expected to retain the Kaizer Chiefs gloves when Amakhosi take on Golden Arrows next weekend.

In other news, Kaizer Chiefs’ former beloved winger Siphiwe Tshabalala is clubless after failing to succeed at AmaZulu last season.

Tshabalala, who is now 37, moved to Benni McCarthy’s AmaZulu last season but only made three appearances in the whole term.

Failing to find a new home in the current campaign means that the Soweto-born star went through the entire season clubless.

What is the issue for such a big Kaizer Chiefs legend?

ALSO READ: Orlando Pirates’ former star – ‘My dad bought me a BMW, paid for my house’