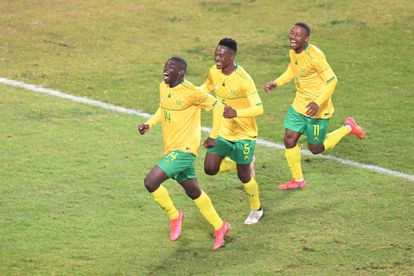 AmaZulu FC assistant coach Siyabonga Nomvethe has seemingly confirmed that Sibusiso Mabiliso will in actual fact be joining Kaizer Chiefs ahead of next season after months of being linked to Naturena!

Mabiliso has been linked with a blockbuster move to Kaizer Chiefs since January and former Amakhosi star ‘Bhele’ Nomvethe, who currently acts as an assistant to Benni McCarthy at Usuthu has opened up about the upcoming move!

While the club are yet to announce any official signings, another signing at Naturena was indirectly confirmed this week. It was Phathutshedzo Nange who himself confirmed his move to the Amakhosi and now, Nomvethe has since all but confirmed Mabiliso’s move to the Glamour Boys.

The 22-year-old AmaZulu defender has the full backing of record-breaking PSL striker Siyabonga Nomvethe. Bhele sees no reason why Mabiliso can’t thrive at Kaizer Chiefs despite the massive stature of the club.

“Ya, he’s a young boy that matured not so long ago. He’s full of talent and he works very hard. He pulls up his ‘socks’ in every match he plays in,” Nomvethe told Kick-off.

“As a young player, he fitted perfectly here at AmaZulu. He performed, he was playing week-in, week-out, so I don’t think he can encounter any problems at Kaizer Chiefs because the level is the same and he will be playing with people like him and in the same league.

“It’s not like he is now going to a difficult stage. As long as he produces the same performances he produced here at AmaZulu, he will definitely get game time at Kaizer Chiefs. He can mark, he can attack; he never gives up. I can’t even rate him because he’s good in everything.”

With Nange and Mabiliso’s moves being somewhat confirmed, many more players are expected to be heading to Naturena in the coming weeks.

Which new players would you like to see Kaizer Chiefs signing before next season and which players do you feel need to be offloaded by the club? Let us know in the comments section below.