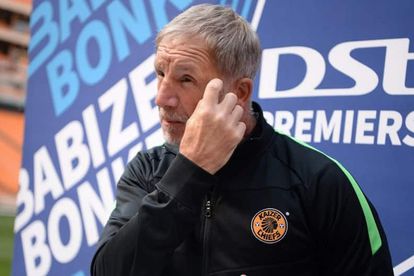 Kaizer Chiefs coach Stuart Baxter has given the most bizarre reason for playing Daniel Cardoso ahead of Austin Dube against Stellenbosch.

READ | EXCLUSIVE: PSL CHANGES ITS MIND, NO FANS FOR THE SOWETO DERBY!

Cardoso returned to partner Erick Mathoho in centre-back for the match which Chiefs lost 1-0 with Dube overlooked altogether.

Dube started the last three games of which Chiefs won two and drew one with Cardoso only coming back into the team as a second half substitute in the 2-1 win over SuperSport United.

And on Tuesday, the centre-back pair of Mathoho and Cardoso couldn’t deal with Ashley du Preez who scored the only goal of the game from outside the Chiefs box.

A section of Chiefs fans felt they were let down by Cardoso and Baxter’s decision to overlook Dube for the match.

Speaking to the media after the game, Baxter said the decision to omit Dube was tactical, adding that he felt Cardoso was best suited for the Stellenbosch game.

Furthermore, Baxter said the performances of the past games were also influential in him opting for Cardoso instead of Dube.

Strangely, Cardoso had not started a game since Amakhosi’s goalless draw with Marumo Gallants on 26 September.

“Everything is a tactical decision in the team. You pick a team that you think it’s the best one for the game based on current form, based on experience, [and] based on suitability to the team,” said Baxter.

“So, I just felt this was the right player to pick based on all the training that I have seen and the performances in the last games,” concluded Baxter.

POLL: Who was your Springbok man of the match against England?