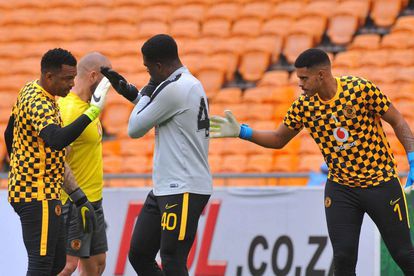 A very well-known former Kaizer Chiefs player has become the victim of a transfer ban imposed on the DStv Premiership side he was set to join.

MUST READ: KAIZER CHIEFS TO BE OFFERED R2 MILLION STRIKER FROM PSL RIVALS

Daniel Akpeyi has been left in limbo as a result of a transfer ban imposed on Swallows FC, according to KickOff.

He was set to join the Soweto-based side after training with them for a while. However, they have an ongoing ban which prevents them from signing, Akpeji.

Akpeyi has been left without a club since departing from Chiefs.

Initially, he was being lined up to join Sekhukhune United but the deal fell threw. Now, he has been training with the Dube birds and a move seemed imminent until it was revealed moments ago that they had on ongoing transfer ban.

Unfortunately, this ban has carried three since the days of the previous Moroka Swallows entity because they failed to pay Serbian goalkeeper Obren Cuckovic and Slovenia midfielder Vladimir Mandic. Cuckovic has still not been paid compensation

Therefore, Swallows can not sign players and Akpeyi will remain a free agent.

Akpeyi is desperate to find a club this January transfer window.

He has gone from first choice Amakhosi keeper to a free agent struggling to find a club.