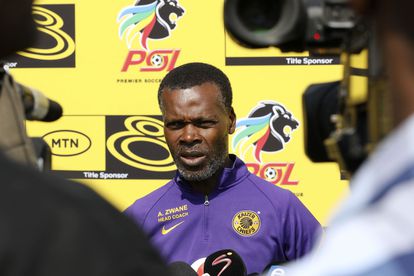 Kaizer Chiefs head coach Arthur Zwane is delighted that Njabulo Blom has returned to his best amid ongoing contract negotiations that have stalled.

The 22-year-old midfield maestro is out of contract in June 2023, and his contract negotiations have become complicated with agent Rob Moore and club executive Bobby Motaung all at the heart of it.

READ | Football this weekend: What to watch and when to watch it

ALSO READ | MTN8 preview: All you need to know from the Pirates, Sundowns, Chiefs and AmaZulu camps

Moore disclosed in a recent radio interview that his client Blom is earnign far less money than other key first-team regulars at Naturena. Motaung’s response was that the club is engaging with Blom’s parents rather than his agent.

READ | Pirates vs Sundowns: Five things we guarantee will happen

During this period, Blom didn’t feature for Chiefs in matches against Cape Town City, Stellenbosch and AmaZulu but returned against Matumo Gallants. He played 90 minutes for only the second time this season when Amakhosi defeated SuperSport.

All of Blom’s 30 appearances last season were as a starter, both as a holding midfielder and a right-back.

Good to see Njabulo playing and doing well. This is the Njabulo we know. We always want to see him on the field because he is one of the Kaizer Chiefs youth products. Once we see him doing well, as a club, we are happy for them.”

Blom faces tough competition for places at right-back but is now an established star in the heart of midfield for AmaKhosi.

How much do you love Blom?