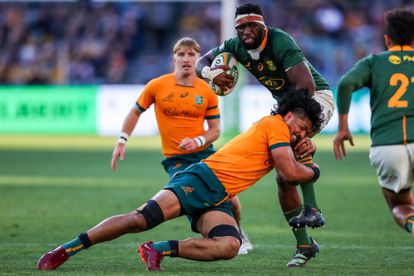 Siya Kolisi of the Springboks (R) is tackled by Pete Samu of the Wallabies during the Rugby Championship Test match between the Australian Wallabies and the South African Springboks. EPA/MATT TURNER AUSTRALIA AND NEW ZEALAND OUT

Siya Kolisi of the Springboks (R) is tackled by Pete Samu of the Wallabies during the Rugby Championship Test match between the Australian Wallabies and the South African Springboks. EPA/MATT TURNER AUSTRALIA AND NEW ZEALAND OUT

In case you missed it, he had his say on Arthur Zwane before Amakhosi’s defeat in the Macufe Cup. This video may be from Saturday but now it’s as relevant as ever.

“I’m a sportsman and I also go through seasons where things are tough,”

“They’re not going out there to play badly or lose. They’re working hard every day to be good and sometimes, things don’t work out.

“The only thing I can say to them is that they must keep on working hard and keep on pushing.” Kolisi said.

READ | How many Springbok caps does Siya Kolisi have?

Kolisi believes that Arthur Zwane is doing his best to return the club to former glories, and fans need to understand that it’s Zwane’s first season with the club where things may go wrong more before they get right.

“There’s a lot of hard work behind the scenes, but for us as supporters, we must keep on supporting and believing.

“Fans can be upset as much as they want, but at the end of the day, abafana bokuthula noxolo bazokubuya (the men of love and peace will bounce back). They’ll come around.”

Kaizer Chiefs fans will be concerned that Amakhosi went down to Royal AM on penalties in the friendly Macufe Cup. However, more important tests lie ahead, with an MTN8 semifinal on the imminent horizon. Chiefs face AmaZulu on Saturday.