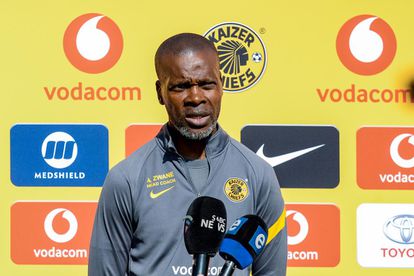 Kaizer Chiefs coach Arthur Zwane has picked the ONE individual he feels has been the team’s star player since the start of the season.

According to Zwane, Kgaogelo Sekgota is the player that has stood head and shoulders above the rest at Chiefs this season, and the majority would agree with him.

The left-footer joined Chiefs at the start of last season when Stuart Baxter was still the head coach but he never really got a fair chance to showcase his talent.

The 48-year-old mentor said the technical team realised that they needed someone like Sekgota who can take on opponents without fear in an attempt to create goalscoring chances.

And Sekgota has done that brilliantly so far, so much so that he even caught the eye of Bafana Bafana coach Hugo Broos.

Now, what Zwane feels is missing for Chiefs is a right-footed player who’s as brave as Sekgota to spark the team to life on the right-hand side of the midfield.

In his assessment, Zwane believes the only thing Sekgota should improve on is his decision-making in the final third in order to score goals.

“Ever since we started this season, he is our star player,” Zwane told journalists on Wednesday.

“When you look at the chances we have created, he is always in good areas at the right time. Sekgota has been doing well.”

“And we want to help other players to be at the same level as him. He is never going to be perfect; he will make mistakes but so far, so good for him.”

He added: “I’m happy for him because he had to be put on a programme where we pushed him because we realised that we need a player like him to play the entire 90 minutes as we couldn’t use him as an impact player all the time.”

“He responded very positively, and as you can see, at least now he can last in the game because whenever he is in the game, anything can happen.

“We need to help him now to improve his decision-making in the final third, and he will be deadly.”

“The good thing is that he is no longer just crossing the ball, he targets areas, and you must have seen the one Caleb missed, and Ashley was also there, and it came again from Sekgota.

“If you look back, the style of Kaizer Chiefs we used to dominate from the wingers, had players who were very quick on 1v1’s they would skin you.”

“And bring in crosses and look for combinations, and when you look at Sekgota, that identity is coming back, and that is what we are trying to do right now,” concluded Zwane.

Sekgota has provided three assists in seven matches for Chiefs this season, and he is undoubtedly the player to look out for this season.