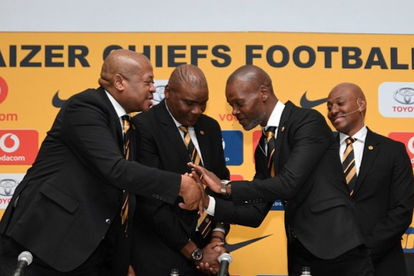 Believe it or not, Kaizer Chiefs head coach Arthur Zwane and Bobby Motaung are part of the reason that Njabulo Blom could leave Naturena.

MUST READ: KAIZER CHIEFS OFFICIALS AND AGENT GIVE BAD NEWS ON NJABULO BLOM!

In shocking reports, Zwane and Motaung are causing issues in the current Chiefs-Blom contract saga, according to TimesLive

Furthermore, Amakhosi have not renewed Bloms contract, as previously reported on The South African.

CHIEFS COACH ZWANE AND MOTAUNG TO BLAME FOR BLOM SAGA?

Shocking reports revealed that Zwane and Motaung are part of the reason that Blom may leave Chiefs.

“The problem is around the head coach and the sporting director (Kaizer Motaung Jr). There was an element of arrogance on their part in handling the matter,” the insider reported on the same publication.

Therefore, it is Zwane and Motaung (Bobby) that are proving stubborn in Bloms bid increased wages.

This is highly problematic given the power their voices hold amongst Amakhosi management.

As it stands, Blom is looking more and more likely to face the Naturena exit door.

However, all hope is not lost and Amakhosi fans do have some hope in the form of time and the rest of Chiefs management. There is still the rest of this month and December for Amakhosi management to make a decision.

Furthermore, the other half of management want to have this matter resolved immedietely as they know the value Blom brings to this club.

He is a fine asset, a utility player and an incredible talent and would be a massive loss to Amakhosi – hopefully, Chiefs management realize this soon.